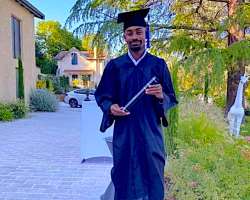 Former Cote d’Ivoire international Salomon Kalou is adequately preparing for life after football as he bagged a degree in Business administration at the Lyon, University, Sportivation reports.

After playing for Feynoord in the Dutch Eredivisie, Kalou hit limelight with his exploits in the English premier league side Chelsea.

The 35-year-old won numerous honours, including the Premier League, the UEFA Champions League, four FA Cups and the League Cup.

He moved to Lille on a free transfer in July 2012 upon the expiry of his contract at Chelsea, where he spent two seasons before moving to German Bundesliga side Hertha Berlin.

He started the program in 2017 and was among the graduands on Saturday.

Kalou scored 28 goals in 97 appearances for Cote d’Ivoire, he was part of the team that won the 2015 Africa Cup Of Nations.