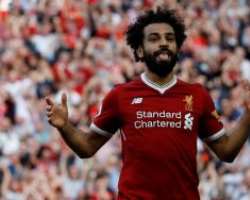 Liverpool could have a fight on their hands to keep Mohamed Salah at Anfield as Barcelona boss Ronald Koeman has made the Egypt international his top transfer target. The new Barca manager is determined to make the shock signing as he looks to restore the La Liga giants to their former glory.

One of Koeman’s closes friends claims the Dutchman wants Salah and not Sadio Mane at the Nou Camp.

Sjaak Swart, a former Holland international who is Ajax’s record appearance holder, told website voetbalzone.nl: “I know Koeman wants him – and I know Salah would like to go.”

When pressed to reveal the source of his information, Swart added: “I can’t.

“I am not going into any more details, but just believe me that I know.”

Liverpool midfielder Georginio Wijnaldum has already been linked with a move to Barcelona this summer.

With Lionel Messi now seemingly staying put it would be very tricky for the Catalan club to raise the money to make a swoop for Salah.

Messi has decided to stay put after it being made clear to him he will not be allowed to leave unless the £630million release clause in his contract was triggered.

Salah has been key to Liverpool’s success in recent seasons and helped them to winning their first top-flight title since 1990 earlier this year.

The Egyptian carried on his stunning form with a hat-trick in the win against Leeds on the opening day of the new Premier League season.

Liverpool beat their opponents 4-3 in a game where attack dominated defence.

Jurgen Klopp’s side picked up all three points thanks to a brace from Salah and a towering header from Virgil van Dijk.

Salah told Sky Sports: “It was at times so tough to play, especially here at Anfield without the fans.

“They pressed well and their intensity was really high. We had a good game.

“They’re a tough team and they reacted really well. They scored three goals against us so we have to keep improving.”

Liverpool return to action against Chelsea next Sunday (4.30pm) in the Premier League.

The Blues have been backed to challenge Klopp’s side for the title this season after spending more than £300m in the transfer window.

This article contains affiliate links, which means we may receive a commission on any sales of products or services we write about. This article was written completely independently, see more details he re