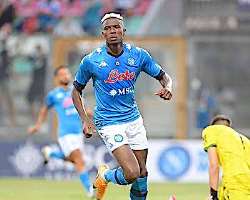 The former Wolfsburg striker joined Napoli from Lille in a deal worth 70 million Euros with add-ons after an impressive first and only season in France, where he scored 18 goals in 38 appearances for the Les Dogues.

It should be recalled that Osimhen scored a hat-trick in his first preseason match for Napoli against lAquila last week.

He has now produced another brilliant performance against Teramo by scoring another hat-trick.

Osimhen opened the scoring in the fourth minute before Hirving Lozano doubled Napoli's lead ten minutes later, he scored his second goal just after the hour-mark.

He completed his hat-trick in the 65th minute as Napoli recorded a 4-0 victory over Teramo to round off their preseason.