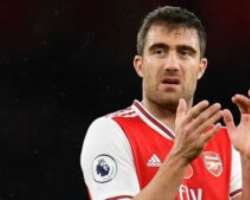 Goal
Napoli president Aurelio De Laurentiis has confirmed that the club are trying to sign Sokratis Papastathopoulos from Arsenal.

The 32-year-old centre-back joined the Gunners from Borussia Dortmund in 2018, but featured just 19 times in the Premier League last term.

Sokratis is in the final 12 months of his deal with Mikel Arteta’s team and they are open to selling him ahead of the new campaign, with the likes of Gabriel Magalhaes and William Saliba having been introduced into the first-team squad.

Napoli have emerged as top contenders to land the defender and De Laurentiis confirmed they hope to bring him to Italy, but says the transfer market is unpredictable.

“We’re working on it,” he said to Radio Kiss Kiss. “The transfer market is a laugh. In the world of football, balls swell out of proportion, it seems that you are talking to people who are blackmailers.”

But the Napoli chief has admitted that he has been unnecessarily stubborn when it comes to keeping the Serie A side’s top players, citing midfielder Allan and centre-back Kalidou Koulibaly as examples.

Allan looks set to reunite with ex-Napoli coach Carlo Ancelotti at Everton while Koulibaly has long been a target for Manchester City, among others.

“They are two excellent players, but I should have sold them first,” he said when asked if the pair will be sold in this transfer window.

“I didn’t sell the Brazilian midfielder to protect Ancelotti. When I was offered €110 million, I was unfair not to sell Koulibaly to the Premier League.

“I realised that you have to give up the players when the time is right, even if they have only been with us for just a year.

“From now on, when there are important offers, we will sell. I understand that in this country, which guarantees nothing, you have to live for the day.

“When I was offered €110 million I was unfair to the fans. Same thing with Allan, even if there he was a sort of protection for Ancelotti.”

He continued: “I think [Allan to Everton] is all done. I don’t know if there is a signature or not, you have to ask [CEO Andrea] Chiavelli.”