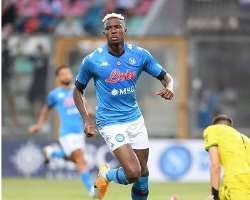 The Super Eagles striker joined the Italian club in a club record 70 million Euros deal from Lille after a productive first season in France.

Osimeh scored a hat-trick and recorded an assist in his first preseason match against Aquila last week.

De Laurentiis has described the 21-year-old as a man of dignity.

"In my opinion, he has all the qualities, but above all, he has an important quality," he said.

"He is a very young man who managed to overcome his adolescence by losing his parents at a very young age and grew up in a complicated country like Nigeria.

"This boy must have suffered a lot, but he has also learned what dignity is. Above all, he shows great dignity."

Osimhen will be hoping to hit the ground running when the Italian League resume on September 20 against Parma.