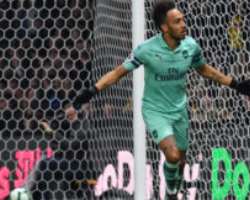 Mikel Arteta claimed Arsenal captain Pierre-Emerick Aubameyang is close to signing a new contract after the Gunners beat Liverpool 5-4 on penalties following a 1-1 draw in the Community Shield on Saturday.

Aubameyang put Arteta's side ahead in the first half at Wembley with a typically eye-catching strike.

Japan's Takumi Minamino equalised with his first goal for Liverpool late in the second half of the annual pre-season friendly between the Premier League champions and FA Cup winners.

In the shoot-out, Liverpool's young striker Rhian Brewster was the only player to miss, hitting the bar with their third penalty before Aubameyang calmly dispatched the decisive spot-kick.

As if Arteta needed any reminding, it was another sign of the influence wielded by his captain Aubameyang, who is yet to commit his long-term future to the club as he enters the final year of his contract.

Gabon forward Aubameyang has kept Arsenal waiting nervously during protracted talks and he demurred when asked in a post-match interview if he was ready to sign the club's contract offer. File photo: Arsenal's Spanish head coach Mikel Arteta shouts instructions to his players from the touchline during the English Premier League football match between Arsenal and Sheffield United at the Emirates Stadium in London on January 18, 2020. Daniel LEAL-OLIVAS / AFP

“We are going to see, today we will just take the trophy and that is it,” he said.

Arteta has remained confident the 31-year-old will stay and he insisted his talisman's status will be resolved to his satisfaction before the Premier League season starts on September 12.

“We are close,” Arteta said of the contract. “He was magnificent in the FA Cup final and again today.

“I try to do my job, which is convince him that he is in the right place, that he has the environment here to produce the moments like he's done today and he's done here three weeks ago.

“I am very positive that he's going to sign but a lot of time there's a lot of things involved in a contract deal and we are trying to show him.”

For Liverpool, it was the second successive season they have lost the Community Shield on penalties after being beaten by Manchester City last term.

That is unlikely to concern coach Jurgen Klopp too much given the champions' lack of rest and preparation since winning the title for the first time in 30 years.

“For these types of games, you need the final punch. We created enough, had the ball quite a lot, but had to be careful of their counter-attack,” Klopp said.

“A penalty shoot-out is always a little bit of a lottery and we were unlucky there, so congratulations to Arsenal.”

The Community Shield traditionally serves as the curtain-raiser to the new English season.

But Liverpool and Arsenal were back in action just 34 days after the end of the coronavirus-delayed Premier League campaign and only six days after the Champions League final concluded the entire 2019-20 season.

– Tactically astute –
After only one week of pre-season training, it was a more encouraging result for Arteta, whose team emulated their FA Cup final win over Chelsea with another determined, tactically astute display.

Liverpool were without the injured Trent Alexander-Arnold and the naivety of his teenage replacement Neco Williams was exposed by Aubameyang in the 12th minute.

Cutting in from the left to reach Bukayo Saka's pass, Aubameyang was given too much time and space by Williams.

Aubameyang made him pay with a superb curler into the far corner from the edge of the penalty area, celebrating the goal by crossing his arms in tribute to “Black Panther” actor Chadwick Boseman, who died Friday aged 43.

It was Aubameyang's fifth goal for Arsenal at Wembley, making him the club's joint-highest scorer at the national stadium with Alexis Sanchez.

He scored a brace in each of his previous two Wembley appearances against Manchester City and Chelsea.

Liverpool equalised in the 73rd minute when Minamino slotted home from close range for his first Reds goal in his 15th appearance since his January move from Salzburg.