Man City star De Bruyne is the best midfielder in the world': Xavi 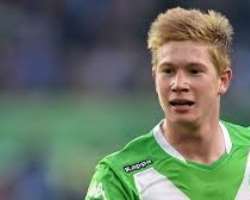 Kevin De Bruyne is the “best midfielder in the world”, according to Xavi, who says the Manchester City star is “on another level” to his peers.

De Bruyne has established himself as one of the most consistent performers in the Premier league since completing a £55 million ($73m) move to City from Wolfsburg in 2015.

The 29-year-old has hit 57 goals in 222 appearances for the Blues, while also providing a staggering 89 assists, 20 of which were recorded in the top-flight last season.

The Belgium international was rewarded for his outstanding contribution with the Premier League Player of the Year award, and also managed to pick up the eighth major trophy of his career at Etihad Stadium in the form of the Carabao Cup.

Xavi, a man who was widely regarded as the standout midfielder of his generation at Barcelona, thinks De Bruyne should now be held up in a similar light due to his decision-making and ruthlessness in the final third of the pitch.

The Blaugrana legend and current Al Sadd head coach told Qatar Airways : “Kevin de Bruyne, from Manchester City, seems to me of another level, brutal, he is able to make a difference. He is the best midfielder in the world and relatively young.”

Xavi went on to express his belief that Pep Guardiola remains the best head coach in the business, highlighting the way he has revolutionised the way football is played.

The Spain international, who played under a fellow countryman at Barca between 2008 and 2012, added: “Pep is the best manager in the world. He has given a twist to our sport. He is very good for what he transmits and his leadership ability. In addition, the way he convinced us, he is very good.”

Xavi went on to select Liverpool’s Virgil van Dijk when asked to name the leading defender in European football. The ex-Barca talisman said of the Dutch centre-back: “I would choose Van Dijk due to his leadership, physical strength and good technical ability.”

Xavi has won two trophies as a manager since taking charge of Al Sadd, and has already been linked with the top job at Camp Nou. He is quite content in his current surroundings for the time being though, having seen his family settle into a new way of life in Qatar.

“Arriving in this country has been one of the best decisions of my life,” said Xavi. “I would highlight security, there is no crime, with strong laws, and for family life it is extraordinary. The people are very respectful. The quality of life is extraordinary. My wife is happy, my children they were born here, my staff is fine too. I’m delighted.