Onyekuru one of the best wingers in Ligue 1: Monaco boss Kovac 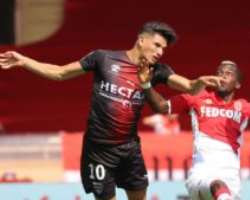 Monaco manager Niko Kovac has lauded Henry Onyekuru and believes he is one of the best wingers in Ligue 1.

The 23-year-old joined the Monegasques in the summer of 2019 after ending his two-year stay with Premier League club Everton following his inability to acquire a work permit in England.

The Nigeria international struggled for game time with the Stade Louis II outfit on his arrival, owing to illness and other factors.

He had to rejoin Galatasaray on loan in January for a change in fortune, having impressed with the side during his first spell, where he helped the club win the 2018-19 Super Lig title.

Onyekuru has returned to Monaco after his loan deal with the Yellow and Reds expired and has been delivering convincing showings for the club during their pre-season games.

The forward has formed a productive partnership with Gelson Martins to the admiration of their manager Kovac.

“You have certainly seen how we played against AZ. We played well, we were well prepared to line up in a 4-3-3,” Kovac told the club website.

“But the system is not important to me, it is mainly the attitude of the players that I watch. Henry and Gelson bring us work on the wings, we know their qualities.

“I have confidence in them, and I think we have one of the best pair of wingers in France.”

Onyekuru will hope to replicate his eye-catching pre-season performances when Monaco take on Reims in their opening Ligue 1 game of the 2020-21 season on Sunday.

The winger started his career with Aspire Academy before he joined Belgian First Division A side Eupen in 2015.

He delivered sparkling performances for the Pandas during his two-year stay with the side and in the 2016–17 season he finished as the league's joint top-scorer with 22 goals, which caught the attention of EPL side Everton and he was subsequently signed in 2017.

Onyekuru has 11 caps for Nigeria since he made his debut against Togo in a friendly in 2017 and was part of the Super Eagles side that finished third at the 2019 Africa Cup of Nations in Egypt.