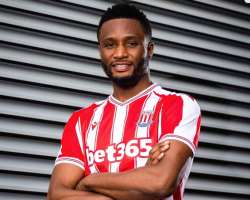 John Mikel Obi has made a return to England after sealing a short-term contract with Championship club, Stoke City.

The former Chelsea midfielder left Trabzonspor in March by mutual consent as a result of a clash between him and the club hierarchy because the league was not put on hold when coronavirus was ravaging the world.

Mikel is now back in the Championship after spending the second half of the 2018-2019 season at Middlesbrough.

Stoke City manager Michael O'Neill is excited to welcome Mikel as the club aim to make a return to the Premier League.

“We’re delighted to bring John to the club. His playing career speaks for itself and underlines his calibre as a player,” O’Neill said.

“I was really impressed with him when we met for the first time and he outlined what he wants from the next phase of his career.

“We spent four hours talking and he made it clear he wants to get back into the Premier League and finish his career there and hopefully he can do that with Stoke City.”