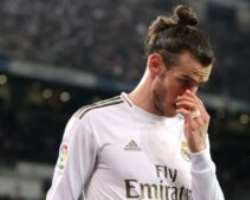 Perform Stat News
Gareth Bale was omitted from Real Madrid’s squad to face Manchester City in the Champions League because he did not want to play, according to Zinedine Zidane.

On Wednesday, Madrid named a 24-man group to travel to the Etihad Stadium and while captain Sergio Ramos was included – despite the fact he cannot play in the second leg due to suspension – there was no place for Bale.

The Welshman scored twice in the 3-1 Champions League final win over Liverpool two seasons ago but will play no part as Madrid seek to overturn a 2-1 first-leg deficit against Pep Guardiola’s side in the last-16 tie on Friday.

Bale has started just once since February – and has been restricted to 110 minutes combined since Madrid’s campaign resumed in June – and Zidane explained it was the 31-year-old’s decision not to be involved in Manchester.

“I will explain because many things are said,” Zidane told reporters in a news conference.

“We have a relationship of respect between player and coach, that is clear. The only thing I can say is that he has decided not to play, and the rest is between him and me.”

Zidane grew increasingly frustrated at answering questions on Bale, who may appear to have no future at Madrid but remains under contract until 2022.

“I have already answered before about the situation. The rest is a conversation between the player and the coach, and I am not going to tell you anything,” Zidane added.

The fourth and final question on Bale – surrounding his future with Los Blancos – was met with a straight bat.

“Gareth Bale is a Real Madrid player, nothing changes. I respect that,” Zidane replied.

“He has decided not to play. All of us here are focused on tomorrow’s game.”

Eden Hazard is part of Madrid’s travelling party, though he has experienced an injury-hit debut season in the Spanish capital.

He was out between November and February due to an ankle problem and then sustained a broken ankle bone, with the congested end-of-season La Liga run-in causing him further discomfort, yet Zidane has been encouraged by his condition since.

“He has had some discomfort about the end of La Liga, but I think he is much better now, we have had time to prepare for the game and now he is confident,” the Madrid boss added.

“I think there was a minor setback after that second injury but now hopefully he can play and hopefully there will be nothing there to hold him back.”