CAN GHANA ACTUALISE AFRICA'S DREAM?, OR WILL FOREVER REMAIN DEFERRED? 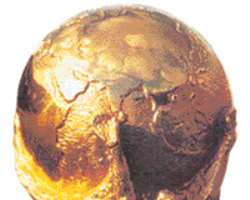 With the 2010 World Cup in the knockout stage, it looks the African dream has been shattered by the dismal performances of African big teams. All over Africa, football fans had waited anxiously for the World Cup to kick off in South Africa in expectation that, with six teams in the 32 that would vie for honour, playing on African soil for the first time, one or two African teams would go further than the quarter-finals.

The local media had done an exemplary job to hype the tournament and the corporate fraternity did their bits by conducting competitions that saw a few lucky winners clinched tickets to watch the matches live in South Africa among other prizes days ahead of the kick-off. Entertainment spots were ready for the big day, with many mounting giant screens, so that the fans could get the action 'at the stadium' live and clear.

For those who could not afford to watch the matches from entertainment spots and cinema halls, and have no TV sets, the matches were beamed free by the national broadcaster on giant screens positioned in public places in various towns, so that as many people as possible would catch the action live from South Africa.

Listening to FM stations call-ins and reading comments in local newspapers and social sites such as Facebook, many Kenyans were banking on Nigeria and Ivory Coast to do better in the tournament because of the high profile players in the two sides. Cameroon, who for a long time has been a favourite for many Kenyans, seemed to have lost a huge chunk of her fan base, owing to her dismal performance on the continental stage in the recent past, but nevertheless, she was expected to do better in the World Cup.

Ghana has supporters but with the injury-induced absence of the midfield lynchpin, Michael Essien, not many gave her a chance of doing well at the international stage despite pulling off an upset to win the Under-20 World Cup last year in Egypt.

Algeria and South Africa were given an outside chance, with some arguing that Bafana Bafana did not actually qualify in the first place for the tournament having even failed to make it to the Africa Cup of Nations in January.

But with the group matches over, Nigeria, Cameroon, South Africa, Algeria and Ivory Coast had been eliminated with only Ghana making it to the last 16. Thankfully though, her progress continues to the quarter-finals after the extra-time win over USA.

Listening to many fans on FM radio call-ins and a chit-chat with some fans at local entertainment spots, the dismal performances by the five African teams were blamed on the African federation's over-dependence on foreign coaches even after the local coaches had done well to have the teams qualified

Nigeria is a real case in point.
What was the point of sacking Shuaibu Amodu, who helped the team qualify for the Mundial, only to hire a Swede, Lars Lagerback, paying him exorbitantly only to be swept out at the group stage? Would a local coach have done a better job with the star-studded Ivory Coast team than what Sven-Goran Eriksson achieved to pocket a cool $3million after spending only a few months with the team?

The less said about the Cameroonian team the better. A cynic told me the other day that the current Elephants players would rather participate in weight-lifting than wasting their muscles chasing the elusive Jabulani ball!

The African players' attitudes have also not escaped the ire of many fans. Even before the Mundial started, the attitude of many top players came into focus and questions were raised as to whether the players are proud of wearing the colours of their national team.

A case in point is Samuel Eto'o threatening to walk out of the Indomitable Lions team after legend Roger Milla accused him of not doing enough for Cameroon. Would Steve Gerrard have behaved in the same manner had he been accused of not doing enough for England? I don't think so. Buying gold watches for affluent team-mates was reckless to say the least.

Didier Drogba has never pulled heroic stunts for Ivory Coast as he does for Chelsea week in, week out. That passion of scoring at whatever cost in Europe has been missing even when he played against the whipping boy, North Korea.

After the disappointing performances by the African elite, the continent now puts her hopes on the Black Stars to cause an upset by defeating Uruguay on Friday and romp to the semis and eventually the final.

The legendary Pele said before the tournament that an African country would be champions of the world. While Pele's prophecies are known to be outlandish, we can only hold our breath and hope this will come to pass.