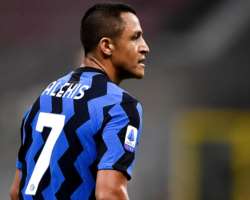 Manchester United are willing to get Alexis Sanchez off their wage bill by sanctioning a permanent move for him at Inter Milan.

The Chilean star has been on loan at the Nerrazurri since last summer, the club are reported to be interested in making his move permanent.

According to Football Transfer expert, Gianluca Di Marzio, Inter Milan won't pay a dime to Manchester United, who initially wanted a €15m transfer fee but they are happy yo let Sanchez go for nothing to free up their wage bill.

The former Arsenal star has reportedly taken a pay cut to make the deal happen, he will earn €7 million net per season compared to €18.2 million he was earning at Manchester United.

The Red Devils will save over £60million on Sanchez's wages by offloading him.

Sanchez endured a torrid time at Manchester United after joining in a swap deal which involved Henrikh Mkhitaryan going the opposite way.

He has been impressive for Inter Milan since the restart scoring three goals and seven assists.