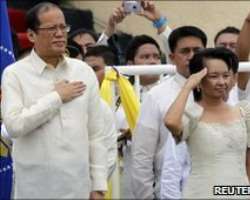 The son of an assassinated opposition leader and a former president has been sworn in as the 15th president of the Philippines.

Benigno “Noynoy” Aquino won a convincing victory in elections in May with pledges to stamp out corruption.

His predecessor, Gloria Arroyo, has said she does not fear his plans to investigate allegations against her.

He has also promised to end long-running insurgencies, and to modernise the judicial system.

Armed forces are fighting both Islamic and communist rebels in the south of the country, particularly on the island of Mindanao.

Another area of concern is the estimated 112 private armies spread around the country, many of which are maintained by powerful local warlords.

His father, an opposition senator during the Marcos era of martial law, was assassinated as he returned to the Philippines from exile in 1983.

His mother, Cory Aquino, became president after what came to be known as the people power uprising three years later.

Her death from cancer last year ignited a huge surge of popularity for her son.

The swearing-in ceremony in Manila's seaside Rizal Park was attended by at least half a million people, many wearing the family's trademark yellow.

Mr Aquino, speaking in Tagalog, took his oath as yellow confetti fluttered down from two helicopters.

He promised to fight corruption and to bring a new era of good governance and reforms to benefit his people.

“Today our dreams start to become a reality,” Mr Aquino told the crowd. “It's the end of a leadership that has long been insensitive to the suffering of the people.”

It was one of several stinging references to the leadership of Gloria Arroyo, whose nearly 10 years in power was dogged by claims of vote-rigging and abuse of power that made her deeply unpopular.

Addressing his new justice secretary, Leila de Lima, Mr Aquino told her to deliver “true and complete justice to all”.

The BBC's Kate McGeown in Manila says Mr Aquino has been trying to dampen expectations of his rule, saying he is “not Superman”.

But he has pledged to set up a “truth commission” to investigate corruption claims levelled against his predecessor. Mrs Arroyo denies the allegations against her.

His speech was greeted with loud cheers. One supporter, Sonia de la Cruz, said: “I was here 24 years ago for his mother's political rally and I came here to see Noynoy take his oath because I want him to succeed.

“I will pray for him. I hope he stops people in government from stealing and delivers his promises to us,” she told Reuters news agency.

The Philippines has been wrestling with poverty, corruption, and armed conflicts for decades. A third of the population still live on less than $1 (£0.66) a day.