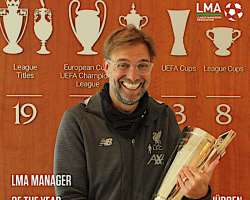 Liverpool Coach Jurgen Klopp has been voted as the League Managers Association (LMA) manager of the year for 2020.

The German Tactician guided Liverpool to their first League title in 30 years with 99 points, 18 clear of Manchester City.

Klopp had earlier won the Champions League in 2019 and the Fifa World Club Cup to cement his place in the club's history.

“Congratulations Jürgen! You have done an absolutely fantastic job. You thoroughly deserve to be named LMA Manager of the Year 2019/2020,” a statement on the LMA website quoted Ferguson as saying.

“Your personality runs right through the whole of your club and the performance level of you and your team has been outstanding.”

Klopp was full of joy after he was handed the award by Sir Alex Ferguson.

“I’m absolutely delighted to be named the winner of the League Managers Association manager of the year award, for this wonderful Sir Alex Ferguson trophy, named after a man that I admire so much,” said Klopp.

“It feels extra special to win this award because it is voted for by my fellow managers.”