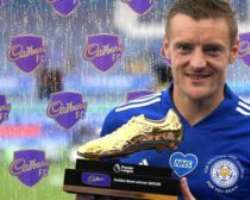 Now that the Premier League season is done, the stats leaders are sorted as the race for the Golden Boot and Golden Glove went down to the wire, while Kevin de Bruyne came so close to breaking the single-season assist record of 20.

Jamie Vardy held off Danny Ings and Pierre-Emerick Aubameyang in the Golden Boot race, while Ederson pipped Nick Pope on the final day in the race for the Golden Glove.

Below is a look at the top goalscorers, top goalkeepers and which players have created the most goals as they try to push towards Kevin de Bruyne.

Plenty of players were eager to pad their own stat lines in the final 90 minutes and they did it. Premier League Golden Boot