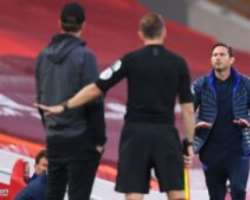 Stats Perform News
New footage has emerged of Frank Lampard’s altercation with Jurgen Klopp and Liverpool on Wednesday, with the Chelsea boss telling the German to “f*** off” and “sit down” as part of a first-half row.

Klopp’s Reds went on to secure a 5-3 win in an absolute thriller, with five different Reds firing goals in the club’s final home match of the season.

While the Reds’ campaign is little more than a victory parade at this point, Lampard’s Chelsea remain in a tight race for a top-four place and, more importantly, the Champions League spot that comes with it.

And Lampard’s emotions boiled over during the first half of Wednesday’s match after a foul was called on Matteo Kovacic, paving the way for a Trent Alexander-Arnold free-kick goal.

In the moments between the foul and the goal, Lampard got into an altercation with Klopp and the Liverpool bench, with the Chelsea boss repeatedly telling the Reds staff to “f*** off” during the exchange.

Lampard initially shouted, “How is that a foul? There’s no foul there,” before getting into a war of words with Klopp, who repeatedly told the Chelsea manager to “calm down”.

The former midfielder then took aim at Liverpool assistant Pep Lijnders, who, moments later, enthusiastically celebrated the Alexander-Arnold goal as Lampard looked on.

Klopp attempted to defend his assistant, telling Lampard not to tell at his No. 2, with Lampard replying: “No, no, if he’s going off at me, I’ll f****** say something!”

After the match, Lampard made sure to state that he has full respect for Klopp and Liverpool, but added that the manager must make sure his side does not get too “arrogant”.

The two managers shook hands after the match, with Lampard also appearing on Sadio Mane’s live stream of the post-match celebrations as he congratulated the Liverpool winger on the league title.

Longtime Premier League manager Sam Allardyce weighed in on the incident, stating on talkSPORT that Lampard is within his rights to call out perceived disrespect.

“I think Frank has been a lot better than I was, as a young manager I found myself a few times in front of the disciplinary committee,” Allardyce said.

“But if anybody wants to say 'don't get too arrogant about it', it's Frank isn't it? “If it's anybody else, they've not done it, but Frank's done it all.

“So if Frank's giving them a bit of a tip, then he's seen something he didn't like, something he thinks is a little bit arrogant, and he's the one man who can mention it.

“And if it is the bench at Liverpool they should take notice of it, because Frank has done the lot.”