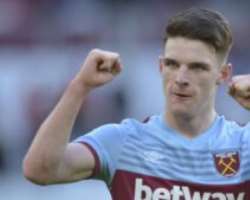 Joe Prince-Wright/ NBC Sports
Declan Rice to Chelsea continues to get plenty of chatter in the transfer news columns as the former Chelsea academy star and current West Ham midfielder looks to be a top target for the west London club.

Rice, 21, left Chelsea as a youngster but is a lifelong fans of the Blues and it is believed Frank Lampard wants him to return to Stamford Bridge and play as a center back, rather than in midfield.

A report from The Times states that Chelsea do not want to pay the full $90 million asking price for Rice and will instead offer less cash million plus send Ross Barkley and Michy Batshuayi to the Hammers.

It is believed the wages of Barkley and Batshuayi will be a problem for West Ham and they don't necessarily want either player and would rather keep hold of Rice and build their team around the England international.

Declan Rice to Chelsea makes sense on so many levels, not only because Chelsea should really start strengthening their defensive unit very soon as they continue to buy and be linked with attacking talents.

Frank Lampard has already signed Timo Werner and Hakim Ziyech for a combined total of $103 million and with Willian and Pedro to leave on free transfers this summer, Chelsea have freshened up their attack considerably.

They also look to be closing in on a $91 million deal for attacking midfielder Kai Havertz , as the spending isn't stopping. Deals for Rice and Leicester City left back Ben Chilwell will be extremely expensive and it remains to be seen whether Chelsea can fund that given their recent spending spree.

Chelsea know they have plenty of restructuring to do when it comes to their defensive players but Havertz, Werner, Pulisic, Ziyech, Abraham, Giroud, Hudson-Odoi, Barkley and Mount in attack is a scary and vast array of options in the attacking third of the pitch.

A new center back, left back and a goalkeeper are needed to truly push Chelsea towards Liverpool and Manchester City and mount a title battle.

Lampard is being back in the transfer window and if they could sign Rice it would arguably be a bigger deal than Werner or Havertz.