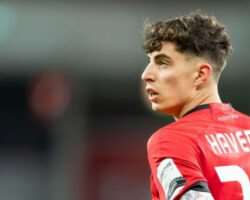 Joe Prince-Wright
The latest Kai Havertz to Chelsea update has arrived and it's a good one if you're a fan of the Blues.

A report from Sky Italy states that Kai Havertz, 21, has agreed terms on a move to Chelsea and the Premier League side are the only club interested in paying $91 million to sign him from Bayer Leverkusen.

Per the report, Chelsea will make the bid in the coming days and Havertz has made it clear that he wants to join the west London club.

The German international has been in superb form during the 2019-20 season and is still scheduled to play for Leverkusen in the remaining rounds of the UEFA Europa League.

Bayern Munich, Manchester United and many others have been linked with moves for Havertz but it appears that the attacking midfielder has his heart set on a move to Chelsea.

Frank Lampard has already signed Timo Werner and Hakim Ziyech for a combined total of $103 million and with Willian and Pedro to leave on free transfers this summer, Chelsea have freshened up their attack considerably.

Chelsea know they have plenty of restructuring to do when it comes to their defensive players but Havrtz, Werner, Pulisic, Ziyech, Abraham, Giroud, Hudson-Odoi, Barkley and Mount in attack is a scary and vast array of options in the attacking third of the pitch.

Havertz can play centrally or out wide and is best drifting around off a central striker. Having Havertz and Pulisic feeding Werner chances will have Chelsea fans drooling over their afternoon beers on Monday as it seems like the move for the German youngster is edging closer.

If Chelsea somehow manage a top four finish, FA Cup triumph and a shock comeback against Bayern Munich in the Champions League (probably not, but who knows!?) then Lampard will have had an incredible first season in charge of the Blues.