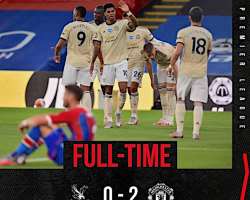 Manchester United know two more wins from their final two games will be enough for a top-four finish in the Premier League after beating Crystal Palace 2-0, with the help of VAR.

Goals from Marcus Rashford (45+1) and Anthony Martial (78) at Selhurst Park took them back level on points with fourth-placed Leicester City, who are set to play United on the final day.

However, Palace were more than a match for their opponents, forcing David de Gea into five saves, and they had a goal overturned by VAR that would have made it 1-1 when Jordan Ayew was deemed to be an inch offside when turning home Wilfried Zaha’s cross. This means seven goals which were originally awarded against United have been overturned by VAR this season, the joint-most of any side in the Premier League (alongside Southampton and Brighton).

Zaha also was left frustrated when he had a legitimate penalty claim waved away in the first half when colliding with Victor Lindelof – a decision that drew criticism from Palace chairman Steve Parish on social media. How United increased pressure on Leicester and Chelsea…

Palace confidence should have been in short supply having lost their previous five games, but Zaha was at United from the first whistle, forcing De Gea into a save within 90 seconds.Advertisement Player Ratings

Subs used: Matic (7), Lingard (6)
Man of the match: Bruno Fernandes
Set-pieces were United’s best route to goal but Harry Maguire could not find the target when getting free from a Bruno Fernandes free-kick.

Palace hit back and Ayew stung the palms of De Gea before the Eagles wanted a penalty a minute before half-time when Zaha tangled with Lindelof after a superb run. More on this story

Referee Graham Scott waved away appeals, while VAR’s Simon Hooper adjudged the Swede to have got a touch on the ball, and the hosts were left even more frustrated when United opened the scoring in the first minute of stoppage-time.

Fernandes and Martial combined before the former found Rashford, who coolly cut back to get away from Patrick van Aanholt and calmly slot past Vicente Guaita to make it two in two after his strike against Southampton.

Undeterred, Palace came out full of energy after the break and thought they had pulled level when Ayew tapped home from close range after some great work from Zaha.

Palace celebrations were cut short after VAR decided the forward was offside by an inch after Stockley Park had used their lines to judge the decision.

That knocked the stuffing out of Palace and United finished strongly with Fernandes bossing the game.

Martial made the three points safe when Rashford found his team-mate with a silky pass inside the area and he rolled a fine finish into the bottom corner.

Open the full version Man of the match: Bruno Fernandes

It is quickly becoming a case of, ‘when Fernandes plays well, United play well’. He was almost non-existent for the opening half an hour and United struggled to find their tempo and rhythm. But when he started getting on the ball, Rashford and Martial began to find space and Palace retreated deeper. He played a huge role in both goals, fizzing some quick passes into Martial, who fed Rashford for the opener, before nutmegging Joel Ward to find Rashford, who played in Martial for the decisive second.

His positive play is infectious and it is taking United to the next level. What a signing.

Open the full version What the managers said
Crystal Palace boss Roy Hodgson: “We’re not fortunate at the moment. The gods of fortune aren’t smiling on us. Firstly with certain decisions, but they’re not smiling on us as we’re doing so well in so many areas and we’re not getting rewards for the efforts. My feelings go out to the players as they couldn’t have done more. We’ve won games against top teams like Manchester United playing a lot worse than we did tonight.

“You’re always going to believe that when decisions go against you like that, they’re wrong but I’m sure Ole has said the decision is right. I find that toing and froing pretty meaningless. It wasn’t a penalty as the referee didn’t give it and the VAR didn’t overturn it. And we feel hard done by again but there are no points for feeling hard done by.”

Manchester United boss Ole Gunnar Solskjaer: “We didn’t really get going, especially before half-time. But in moments we show what we can do and it’s great to watch that tempo when the ball goes forward, the runs go forward, movement of the ball, so two fantastic goals.”