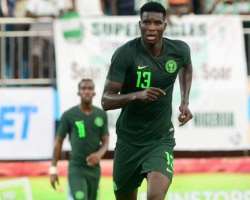 Super Eagles striker Paul Onuachu has tested negative for coronavirus. The Genk forward tested positive last week before the club's friendly match against Termien which was eventually called off.

He has now recovered from the virus and tested negative after another round of testing.

Genk Coach Hannes Wolf has confirmed that Onuachu is set to resume training ahead of their friendly match against Excelsior.

"But Friday he [Onuachu] will just train with the group. Paul can also compete against Excelsior on Friday in the exhibition match,” Wolf told Het Nieuws Blad.

The 26-year-old scored 10 goals and recorded two assists before the Belgian league was brought to an abrupt end due to the outbreak of the coronavirus.

Onuachu made his Super Eagles debut against Egypt in 2019, he has represented Nigeria six times.

He was part of the Super Eagles team that finished third at the 2019 African Cup of Nations.