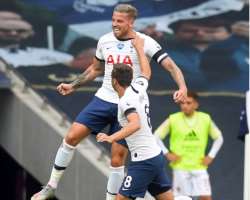 Tottenham recorded a 2-1 victory over Arsenal courtesy of goals from Son Heung-Min and Toby Alderweireld to boost their European place hopes.

The Gunners took the lead through Alexander Lacazette after 16 minutes but Spurs were level almost immediately, when Son took advantage of slack defending from Arsenal to score with a delightful chip.

Both sides had opportunities to score but it was Tottenham that took all the maximum points when Toby Alderweireld scored a glancing header from Son's corner to earn a vital win for Tottenham which takes them two points clear of Arsenal with three games to go.

Bournemouth came from behind to beat Leicester City 4-1 to boost their relegation survival hopes.

The Foxes took the lead through Jamie Vardy in the first half, but the Cherries turned the game around in the second half with four goals to pile more misery on Leicester City.

Soyuncu received his marching orders before the Foxes capitulated Stanislas shot took a deflection off Johhny Evans before sailing into the net.

Solanke scored his second of the match to give Bournemouth their first win in ten matches.