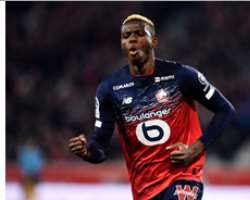 Super Eagles striker Victor Osimhen is ready to decide on a move to Napoli today according to his agent.

The 21-year-old has been linked with a move to Naples in recent weeks, he was in Italy last week to hold talks with the Italian club.

Osimhen impressed in his first season in the French Ligue 1 scoring 18 goals in all competitions for Lille.

“Victor went to Naples with his representatives. We talked and exchanged views on the city: the impressions were good, to tell you the truth,” Okolo told Calcio Napoli 24 .

“After meeting De Laurentiis, Giuntoli and Gattuso, he told me he needed some time to make a decision, without any pressure.

“Later this week he’ll drop his concerns and confirm his decision, whether he decides to accept Napoli’s offer or not.”

“We’re waiting. [His decision] may come not long after today. The coach made him feel wanted. He believes a lot in [Osimhen’s] ability and what he can do," he continued.

“Victor told me there was an agreement on everything but that there was still a couple more things to iron out before the final decision: the announcement should be made by tomorrow.

Similarly, Super Eagles coach has urged Osimhen to join Napoli describing it as a good step forward for the young striker.