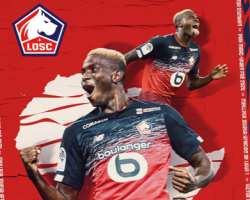 The Lille striker was named African Best Player in the French League due to his exceptional performances in his first season.

The 21-year-old scored 18 goals for Lille and recorded six assists in all competitions before the league was brought to an abrupt end due to the outbreak of the coronavirus.

The Marc-Vivien Foe prize is an annual award in honour of the late Marc Vivien Foe for African best player in the French League.

Marc-Vivien Foe collapsed while playing for Cameroon against Colombia at the 2003 FIFA Confederations Cup in France, he was rushed to the hospital in an attempt to save his life, he died shortly after arriving at the hospital.

“Grateful to GOD for almighty🙏🏽🙏🏽I dedicate this amazing award to my late father❤️thanks to those who voted for me and also a big shoutout goes to @Simon27Moses and the rest of the nominees…thank you once more🙏🏽 ,” Osimhen wrote on his Twitter handle.

The late Patrick Osimhen died in Lagos on Saturday, May 23, 2020, after a brief illness. He was buried last week in Lagos.