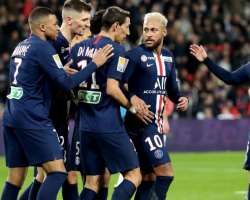 Paris Saint Germain have confirmed that three of their players and one member of staff have tested positive for coronavirus.

The Parisiens were crowned champions in April after the French league was cancelled and positions determined by point-per-game basis.

This will come as a huge blow for PSG as they prepare for the exits of Thomas Meunier and Edison Cavani.

Both players have refused to extend their contracts beyond June which means they won't be available for the remainder of the champions league.

The Tests were carried out on Monday and the club announced that the results on their website.

A statement on PSG's website read: "These individuals had exhibited symptoms during the confinement period when they were not in contact with each other.

"They are no longer contagious and will resume their training program."