Arteta Urges Pepe To Be Consistent 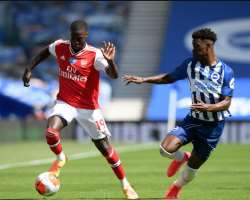 The former Lille star joined Arsenal in a big-money move in the summer but he has failed to live up to expectations.

He was on target for Arsenal in the 2-1 loss to Brighton and Arteta is confident he can begin to show many more of that in subsequent matches.

“It is clear that [Pepe’s] consistency has not been at the level that he can produce, he is the first one to accept that, that’s what I’m going to demand from a player of his level, calibre,” Arteta said on the club’s official website.

“He has to be producing every three days at the level that he can be. He has to be a player that makes the difference, that is a threat, generates fear in the opponents and gives us a big threat in the final third and his work-rate has to be related as well with that kind of performance.

Pepe has scored five goals in 25 appearances for Arsenal in the Premier League this season.

He will be hoping to help Arsenal bounce back from their poor form since the restart when they take on Southampton on Thursday.