JUST IN: Champions League To Resume On August 7th 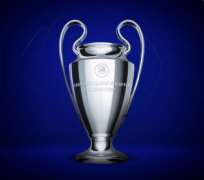 UEFA has announced that this season’s Champions League, suspended in March due to the COVID-19 pandemic, will resume on August 7th and be completed with an eight-team mini-tournament which will take place in Lisbon.

UEFA deputy general secretary Giorgio Marchetti made the confirmation to AFP after an executive committee meeting held by video conference.

The quarter-finals and semi-finals will be played over one leg, instead of the usual two, with the final to be held on Aug. 23.

There are still four outstanding round-of-sixteen fixtures to be played. These ties are Real Madrid v Manchester City, Juventus v Lyon, Napoli v Barcelona and Chelsea v Bayern Munich. The fixtures will take place on Aug. 7/8, either at the originally scheduled venues or in Portugal.

The plan allows for quicker completion of the season than the traditional two-legged home and away format but does mean the competition will have six fewer games which will cost UEFA broadcast revenue.

The Europa League, which is halfway through its last 16 stage will follow a similar pattern, with the final rounds to be played in western Germany, with Inter v Getafe and Sevilla v Roma, both of which had their first-leg postponed due to COVID-19, moving to neutral venues and becoming single-leg ties. Again, it is yet to be decided whether the remaining second legs will be played at home or neutral venues.

According to Giorgio Marchetti, “The quarters, the semi-final and the final will be played at four German venues in the same reason: Cologne, Duisburg, Dusseldorf, and Gelsenkirchen between the 10th and 24th of August.

“The round of 16 matches will be played on the 5th and 6th of August. Then we have the special cases of Inter vs Getafe and Sevilla vs Roma”, Marchetti concluded.

Istanbul, which was due to host the 2020 final, will now instead be the venue for the 2021 edition, with all other scheduled hosts moving back a year, UEFA stated.