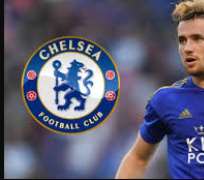 Leicester City have dropped their asking price for Chelsea target Ben Chilwell according to Tribal Football.

The London Evening Standard says Leicester, a place above the Blues ahead of the Premier League's resumption next week, are all but resigned to selling the England international this summer, with Chelsea prioritising the left-back with Timo Werner's move set to be completed before Monday.

The midlands club were holding out for a similar fee to the £80million Manchester United paid for Harry Maguire last summer, but given Chilwell's desire to move to west London and the impact of the coronavirus on the transfer market, could be forced to accept closer to Chelsea's £50million valuation of the 23-year-old.

The Foxes are still in a strong bargaining position given that Chilwell is contracted until 2024, but have begun looking at replacements for the full-back, including former Chelsea man Ryan Bertrand, now of Southampton.