How I Overcame Failure To Become A Star - Kante 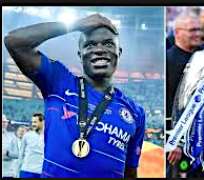 Chelsea star Ngolo Kante has shared his grass to grace story, and how he was rejected by clubs when he just started his football career.

Kante, who is a multiple premier league winner, with Leicester City and Chelsea, he also played a key role in France world cup triumph at the 2018 FIFA World Cup in Russia.

"I didn't always believe that I would become a professional footballer," said the Frenchman.

"When I was younger I played in the lower leagues, I failed quite a few trials at professional clubs.

"When I failed I watched the players in those academies and went home and told myself there was a lot of work to do.

"I worked twice as hard to keep up the hard work and maybe one day it would happen.

"I think those failures allowed me to build myself to become a professional player."

Kante has endured an injury ravaged season having missed major part of the 2019/2020 season.

The France International is training individually over fears of Covid-19 as the premier league returns on June 17.