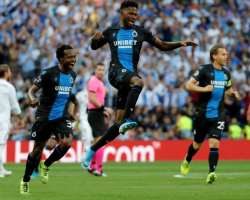 Italian side, Napoli have reportedly shown interest in Nigerian young attacker, Dennis Bonaventure and look forward to bringing him to the Naples in the summer.

This is after the club was snubbed by Lille when striker, Victor Osimhen.

Recall that Osimhen has been linked some big clubs in England but despite that, it was reported that the 21-year old was he's for Napoli.

But Eurosport journalist, Manu Lonjon wrote on his Twitter handle that the former Charleroi striker had rejected the chance to join the side led by Gennaro Gattuso, with the Blues now turning their attention to signing his compatriot Dennis, who plays for Belgian side, Club Brugge.

Meanwhile, Osimhen's agent, Jean-Gerard Benoit had declared that the young forward would not be going to the Italian SerieA, stating that the place wasn't suitable for him.

"Absolutely not, there is nothing. I don't think he can complete his growth path in Italy, where there is an important problem: racism."