Oshoala Asks For Davido's Private Jet To Travel To Nigeria 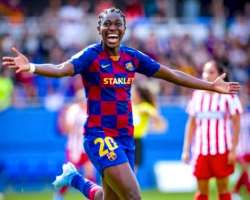 Super Falcons striker, Asisat Oshoala has asked superstar musician, Davido to borrow her his private jet to be able to move from Spain to Nigeria.

The former Arsenal star expressed her frustration because she was unable to travel to Nigeria due to the scourge of the pandemic which has grounded everything.

The Barcelona star has asked Davido to help her with his private jet in a post on Twitter, she mentioned the talented musician in the post.

Davido is yet to respond as at the time of filing this report.

It will be recalled that Barcelona were declared Champions of the Spanish Primera Iberdrola earlier this month as the league was ended due to the outbreak of Coronavirus.

The 25-year-old won her first league title in Europe after winning the Copa Catalunya Cup and the Super Women's Cup.

Oshoala scored 26 goals in 25 appearances for the club in all competitions before the league was ended.

Oshoala became the second African woman to win the Spanish Iberdrola title after Equatorial Guinea's Jade Boho won it with Rayo Vallecano in 2009, 2010 and 2011.