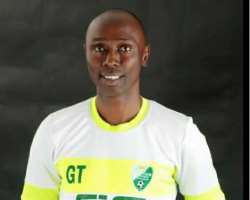 The Head Coach of the national U-20 women’s football team, the Falconets, Moses Aduku has expressed his desire to lift the trophy in Costa Rica.

Nigeria’s Falconets were about to play Burkina Faso in the first leg of the first round of African qualifiers in Ouagadougou in March 2020, but the outbreak of the novel Coronavirus pandemic stopped the tie just as World and Continental football activities are still suspended.

The world football governing body few days back announced the postponement of the competition which was earlier slated for Costa Rica and Panama later this year to 2021.

But Coach Aduku, while speaking Sports Radio 88.9 Brila FM, monitored by Prompt News is dreaming of winning the FIFA U-20 Women’s World Cup trophy with the Falconets in Costa Rica.

His words “My dream is to be the Best Coach of the next FIFA U-20 Women’s World Cup final, and I want to lead the Falconets to do what they have not been able to do. I want to win the World Cup this time with the team. This is what I want to achieve.”

Adaku also said that he has started to work towards achieving his dream by introducing the philosophy of hardwork to the present group of Falconets players.

“I have introduced my own philosophy of football to the Falconets. Any player who has been opportuned to work with me know what I stand for and that is hardwork, hardwork and hardwork. It means that you have to be ready to go the extra mile to achieve the desired results”, Coach Aduku stated.

The Falconets have qualified for every edition of the FIFA U-20 Women’s World Cup and have been runners-up twice, losing to Germany on both occasions in 2010 and 2014.