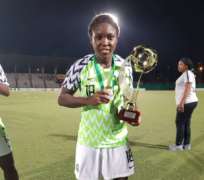 Super Falcons forward, Rafiat Sule, has revealed that the Nigeria Women's Football League is improving and the league can get better, if sponsors can be persuaded to support the current board led by Aisha Falode

Former captain of the Super Falcons, Desire Oparanozie, had called on the NFF to consider paying the male and female National team equally, saying that it's unfair to the female contingent to be paid lesser than what the male National team is being paid.

Sule however, becomes the latest player to back the Oparanozie in the fight for equal pay for the two main national teams.

The call was made on Tuesday in an interview with Sportivation, a sports platform on WhatsApp.

When asked about her evaluation on the Nigerian Women's League, the Edo Queens striker said "I think we are improving and what is needed most in women league in Nigeria is sponsors, I believe if we have a lot of sponsors a lot of foreign players will troop in just like our players are also going out of the country."

The former Rivers Angels striker also thanked her fans for their support and assured that the fans would not be disappointed.

"Thanks to you all for coming out, God bless. I promise you all that the best of me is yet to come and will not disappoint you my fans." She concluded.