The 2002 AFCON In Mali Was A Corrupt Tournament - Sunday Oliseh 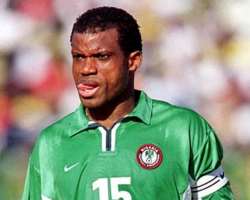 Former Super Eagles coach, Sunday Oliseh has revealed his experience with the Super Eagles during his nine years as a player.

Oliseh, who was a key member of the Super Eagles team that won the AFCON in 1994 in Tunisia, under the tutelage of Dutch tactician, Clemens Westerhof.

The former Borussia Dortmund midfielder made 63 appearances for the Super Eagles before retiring in 2002.

He explained that the 1994 AFCON tournament opened doors of opportunities for him as he secured a move to Italy to play for Reggiana, becoming the first Nigerian to feature in the Serie A.

Oliseh told The Punch "The 1994 Afcon was very special for me. In fact, it was my first major tournament for Nigeria in Tunisia and we had some great talents in the squad at that time"

"We were favourites heading into the tournament and we ended up winning it. On an individual note, it was the breakthrough for me at international level."

“So, it was like I opened the tournament and closed it for my country. It was really exceptional and special for me. I was voted the player of the tournament by France Football and that was a confirmation that I could really go further with my game.

Oliseh was dismissed from the national team after the 2002 Africa Cup of Nations in Mali and subsequently missed the World Cup that same year.

“The Nations Cup in Mali could simply be tagged the corruption tournament. It was all about corruption. Those in charge of the football body then were not prepared to share Fifa’s World Cup money with the players,” he added.

"I approached the sports minister then that we were tired of being owed and it was unfair. All I heard was that for standing up to the minister you’re not going to captain the team to the World Cup. Finidi George was dropped because he was aware. It’s always been one man’s world against the NFF and the one man is wrong."