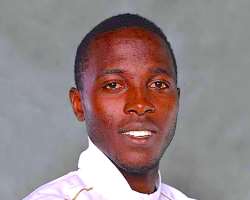 Nigeria U23 left back, Godfrey Bitok Stephen, has been confirmed positive to the Covid19 virus.

Stephen, who plies his trade in the Belarusian league for Isloch, becomes the first Nigerian player to test positive to the virus.

The 19-year old full back is an integral part of the Isloch team, he was voted in the team of the week in the last match he played before the league was suspended.

Bitok, according to reports, has now been isolated following the commencement of treatment of the virus buy the Belarusian health authorities.

Recall that the Belarusian league was the only league going on in Europe after many leagues were suspended amidst the Covid19 pandemic, however, the league was halted last week following the spike in the cases of Covid19 recorded by the country.

Meanwhile, there seem to be light at the end of the tunnel for other leagues in Europe as regards resumption.

The German Bundesliga returned on Saturday with a bang as the rest of other major league envisage resumption next month.