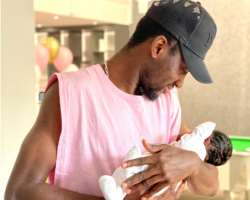 Super Eagles midfielder, Wilfred Ndidi is a proud father after his wife gave birth to a bouncing baby girl on Friday.

Ndidi married his longtime girlfriend, Fortune, in May 2019 and just a year after fortune has smiled on them as the couple welcome a cute baby girl named Jaina.

The Leicester City Midfielder has enjoyed a breakthrough season in the premier league with several exceptional performances for the foxes which has drawn praises from far and near.

Ndidi has been linked with a move away from Leicester City, it is left to be seen whether he will leave the Foxes for greener pastures when the 2019/2020 season ends.

Ndidi made his Super Eagles debut in 2015 in a friendly match against Congo, he was oaet of the team that finished third at the 2019 African Cup of Nations in Egypt.

Nigerians have trooped to Social Media to congratulate Ndidi and his wife on the arrival of their bundle of joy.