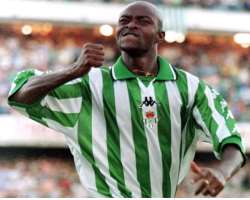 This was confirmed in a five minutes video compiled by SuperSports and posted on their verified Twitter account.

The video comprises of selected African players (past and present) to have played in the LaLiga.

Apparently, Finidi’s inclusion in the list is due to his remarkable performance for the Andalusian club, Real Betis. A club he joined from Dutch giants Ajax in 1996.

During his time at Betis, Finidi did double digits of goals in nearly every season, with Betis, finishing fourth in his first year.

Finidi also helped the club to the final of the Copa del Rey which they lost to 3-2 to Barcelona, a game in which he scored.

Other notabe African players who were also included in the list are Cameroon legends Samuel Eto’o and Jacque Songo’o, Yaya Toure of Cote d’Ivoire and Mali’s Seydou Keita.