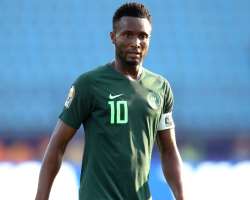 Ex-Super Eagles captain, John Obi Mikel is be courted by top Mexican clubs, as well as the champions of the Mexican league, Monterrey.

Mikel has become a free agent after former club, Trabzonspor terminated his contract in March, when he called for the Turkish league to be cancelled, in the wake of the outbreak of the coronavirus pandemic.

According to reports from a Mexican reporter, Diego Medina, the former Chelsea and Middlesbrough midfielder is being closely followed by a team from the country’s capital and could be considered as a major signing for the club.

It's also understood that the club could make a move for the Nigerian before the resumption of the Mexican league, after the COVID-19 pandemic.

Meanwhile, the 33-year old defensive midfielder is also on the radar of Brazilian clubs Botafogo and Internacional.

Mikel had in April confirmed interests from Brazilian side Botafogo but was only going to give consent if the decision was right for his family.

Mikel has played a total of 455 games at club level in Norway, England, China, and Turkey, scoring 11 goals, with 18 assists.