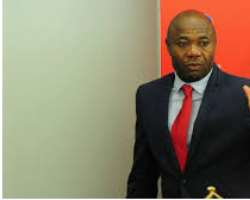 Former Golden Eaglets manager, Emmanuel Amuneke has revealed he's not interested in the Super Eagles' job at the moment.

Amuneke has been linked with the Eagles job consistently as well as other Ex-internationals amidst the contractual tussle between the NFF and Gernot Rohr.

The 49-year old is currently a sporting director with Egyptian club El Makkasa after leaving the coaching role and insisted he is focused on helping his side achieve greater success after the Covid-19 pandemic.

"I’m not seeking for Super Eagles job, I have made myself clear, and I don’t need to be repeating myself," Amuneke told Brila FM.

"Nobody knows my life more than God like I said if it is the will of God one day, I will coach the national team."

"You have a coach there in the team, and I have made it very clear, the coach himself has done very well so there’s no need for baseless rumours."

“I have my own challenges that I have to face and see, I hope that after Covid-19, we will be in a position to see if we can reform our team and then get back to the plans we have in mind."

The former Super Eagles winger started his coaching career with Nigeria U17 and guided the Golden Eaglets to win the 2015 World Cup in Chile.

He also had a stint with Al Khartoum, and was later appointed as the manager of Tanzania national team and qualified the East African country for their first Africa Cup of Nations in 39 years.

However, Amuneke was relieved of his job following poor results at Afcon, where the Taifa Stars failed to win a single game in the tournament.