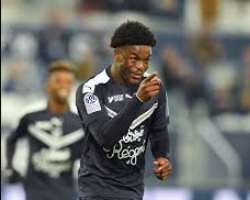 Super Eagles young forward, Josh Maja has emerged as the highest goalscorer of his French side, Girondis Bordeaux for the 2019/2020 season after the season was cancelled due to the Covid19 pandemic.

Bordeaux in a statement on its Official website announced Maja as the highest goalscorer in all Competitions with 8 goals.

“Three Bordeaux players have the same number of goals on the podium! Josh Maja, Jimmy Briand and Nicolas De Préville have all scored eight times this season. First place, however, goes to the Nigerian striker (Maja),”

“Indeed, the former Sunderland player has played less, He has a goal ratio every 113 minutes. A better result than Jimmy Briand (1 goal/222 minutes) and Nicolas De Préville (1 goal/281 minutes).”

Maja's form in Bordeaux earned him a callup to the Eagles from coach Gernot Rohr for his debut and only game coming up in the 2-2 draw with Ukraine September 10, 2019.

Meanwhile, there would be no sporting event in the French nation until September after the Prime Minister, Edouard Phillipe, suspended all elite sporting activities last month.