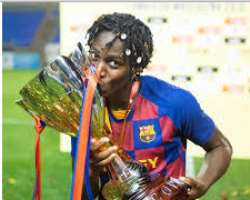 Super Falcons captain, Asisat Oshoala has won the Spanish Women’s league title with FC Barcelona Femeni as the current 2019/2020 Primera Iberdrola season comes to an end due to Covid19 pandemic.

The Royal Spanish Football Federation, RFEF, announced in the early hours of today that the women’s league will not resume, implying that the Spanish federation has taken their decisions about promotions, relegations, championships, and European competitions.

The Royal Spanish Federation of Football, RFEF, therefore chose to finalise the Primera Iberdrola 2019/20, with FC Barcelona as champions and the league ending without relegations.

Asisat Oshoala, 25, arrived at FC Barcelona Femeni from Chinese club Dalian Quanjian F.C. initially on a loan deal but following her scintillating performance for the female Barca side, her contract was made permanent untill 2022.

The three-time AWCON winner scored 20 goals in 19 games to help Barcelona finish with an undefeated season, with 19 wins and 2 draws, claiming their fifth title.

Meanwhile, Barcelona alongside Atletico Madrid women's team will have a European place for the next season of the 2020/21 UEFA Women’s Champions League.