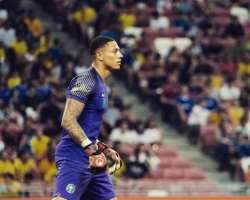 Super Eagles goalkeeper, Maduka Okoye, has revealed that he didn't hesitate to choose Nigeria over Germany when it was time for him to decide his international future.

The German-born Nigeria goalkeeper pledged allegiance to the Eagles in 2019 and got his first cap in an international friendly against Brazil in Singapore last September, coming on as a replacement for the injured Uzoho .

Okoye in an Instagram live interview said choosing Nigeria was an easy decision.

"It was easy to choose playing for Nigeria, I never dreamt of playing for Germany, I always wanted to play for Nigeria. So, when I got the call, the first one for the U-23 team, this was the dream, this is my fatherland, it was easy, however, I was not released by the club for the U23"

He further discussed how happy he was on his debut or the Super Eagles "It was an unbelievable moment playing for Nigeria against Brazil, it was amazing, I could talk about that for two hours"

"When the coach called me to get ready, I was on fire, hot, but also nervous because you are playing for your country, this is not playing for a club, that is also good, but you cannot compare playing for the country."

"But as soon as I stepped on the pitch, all my thoughts disappeared, it was like any other game, I was just focused, I would do my thing."

Okoye and Francis Uzoho both got call-ups to the Super Eagles after Carl Ikeme was forced to call time on his career due after battling with leukemia two years ago.