Martinez Ready To Leave Inter In The Summer 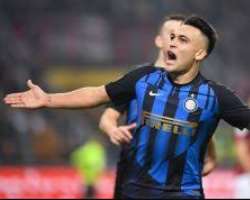 Inter Milan Argentine striker, Lautaro Martinez has informed the Inter hierarchy of his intentions to leave the Nerazurri this summer.

The 22-year old has been consistently linked with Barcelona since January and according to reports on The Daily Mail, he has informed his Italian club he would not accept any new deal as he has his heart set on moving away from Inter.

Inter Milan according to reports are now prepared to accept a cut price offer of £80M in order to ameliorate the financial stress the club might face amidst coronavirus pandemic.

Barcelona however are looking for ways to offer a package worth £80M and are also willing to offer players as part of the Martinez deal.

Meanwhile, Reports from Italy claim that Inter have asked to have Arturo Vidal and want-away French forward, Antoine Griezmann on loan as part of the deal for Martinez but it's left to be seen if Barcelona would agree to that deal.

The Argentine forward have built a formidable partnership with Belgian striker, Romelu Lukkaku and has scored 16 goals in 31 appearances for Inter this sesson.

Moreso, should the transfer to Barcelona not pull through, Manchester United and Paris Saint-Germain are on ground with more funds to price away the Argentine striker.