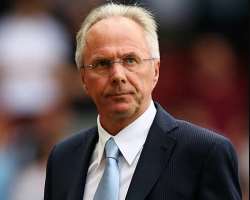 Former England coach, Sven Goran Eriksson said he rejected Nigeria national team job in 2010 because he was told to split his salary.

Erikson was shortlisted for the Super Eagles job in 2010 to replace the late Amodu Shuaibu.

“I’ve never applied for a job in my entire life,”Erikson stated in an interview with Branchen

“All my assignments have come about through the results I have achieved. I have never gone through any traditional job interviews, never sat down and conducted any tests or been analysed.

“The closest I have come to an interview is that I met the owner or chairman of the club or national team during a dinner or some other context. But then it was really just about meeting to talk about terms and contracts.”

Erikson added, “The only time I can remember having undergone any form that resembles an interview was when I was asked about the job of Nigeria’s national team coach in 2010 ahead of the World Cup in South Africa.

“I went down in the belief that I would meet the chairman of the national team association (NFF) and that it was really only contract formalities that we would go through. But when I arrived, several coaches had received the same invitation, including Lars Lagerbäck. I was very surprised but found myself quite quickly.

“After a while, I was called into the room with a chairman who declared that they wanted me as a coach, but with the proviso that my salary would be divided into two parts: one that I got into my account and another that would be deposited into another account that was not in my name. “There I refused on the standing. I thought something didn’t go right,”

Largerback was later appointed to take charge of the Super Eagles to the 2010 FIFA World Cup in South Africa.

The team crashed out in the first round and the Swedish manager could not continue as the coach of the team.