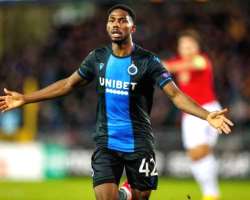 Super Eagles striker, Emmanuel Dennis is on the verge of joining Wolverhampton Wanderers from Club Brugge.

The 22-year-old has been linked with a host of top European clubs as a result of his impressive performances for the Belgian club including a brace against Real Madrid in the Uefa Champions league.

Wolves are on the lookout attacking reinforcements to relief Raul Jimenez off the goalscoring responsible having featured in 44 matches in all competitions this season.

According to Eurosport, the premier league side are closing in on Dennis, facing stiff competition from the likes of Arsenal, Everton, Newcastle, Leicester City among others.

Wolves signed Patrick Crutone last summer but the Italian striker was allowed to leave on loan in January after failing to impress at the Molineux.

Emmanuel Dennis has scored 11 goals in 33 appearances for Club Brugge in all competitions.

Dennis has represented Nigeria at the U-15 and U-23 level, he made his Super Eagles debut in a 2-2 draw against Ukraine in an international friendly match.