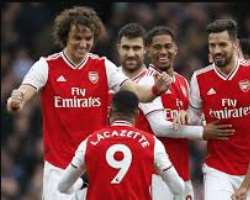 English Premier League club, Arsenal will resume training beginning from next week according to reports from the English Media.

Although, the North London side stated that despite that, it would still adhere to British government guidelines that has been mapped out to curb the spread of the disease.

The club's spokesperson noted in a statement "Players will be permitted access to our London Colney training grounds next week,”

“Access will be limited, carefully managed and social distancing will be maintained at all times.

“All Colney buildings remain closed. Players will travel alone, do their individual workout and return home.”

Recall that the English Premier League has been on suspension since Mid-March due to the outbreak of the pandemic.

Arsenal's players will now have access to training pitches but would still maintain strict rotational basis that will see them practicing social distancing.