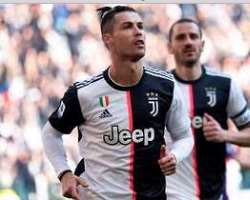 Real Madrid President, Florentino Perez has ruled out a return for Cristiano Ronaldo to the Santiago Bernabeu.

The former Manchester United star has been linked with a £50m move to Real Madrid due to the financial doubts raised by the suspension of the league because of Coronavirus.

Several Italian media outlets are reporting that the Portuguese international may be set for a return to Santiago Bernabeu where he enjoyed a trophy-laden nine years before leaving in 2018.

But according to Marca a boardroom source, Perez would not consider re-signing the 35 year-old, despite his respect for the player

“This does not fit into the club’s sports policy. Florentino Pérez appreciates him, but his time has passed and his sporting objectives are different,” said the source.

Ronaldo joined Real Madrid from Manchester United in 2009, he went on to become the club's top scorer before leaving for Juventus in 2018.

He also won the FIFA Best Player of the year award four times.

The Italian League is currently on hold due to the outbreak of Coronavirus, Juventus playing staff have agreed to take a pay cut to ease the burden on the club.