Don't Compare Me With Kante - Ndidi 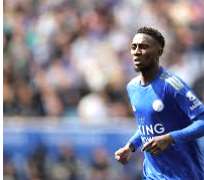 Leicester City midfielder Wilfred Ndidi has described himself as a different player from Chelsea midfielder N’Golo Kante who he sees as a machine.

The 23-year-old moved to England in January 2017 to fill the void left by Kante following his move to Chelsea in the summer of 2016.

Before his exit, the France international played a crucial role in the midfield to help Leicester City win the 2015-16 Premier League title.

Ndidi has been playing a similar role for the Foxes since 2017, and he is rated as one of the best tacklers in England, however, he said he is trying to play his game and help the team.

"I've always seen myself as Ndidi, I want to be seen as Ndidi,” the Super Eagles midfielder said in an Instagram live.

"Kante is a great player, if you see the way he plays, you'll know he's a machine.

"The advice I got right from the time while I was playing that position is just be yourself.

"I just want to be myself, play my game and fight for three points."

Ndidi has been a regular in Brendan Rodgers' team this season before the suspension of the Premier League due to the coronavirus pandemic.

He has featured in 23 league games so far with two goals to his name for Leicester City who are third in the English top-flight standings. (Goal)