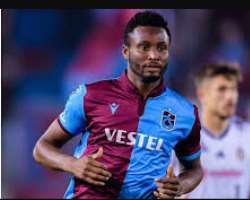 According to Yahoo Sports, the Brazilian side are in talks with the Nigerian midfielder who is currently a free agent after leaving Trabzonspor last month.

Mikel reportedly cut ties with the club after the Turkish Super Lig continued as normal despite the outbreak of the coronavirus (COVID-19) pandemic, which has claimed over 47 000 lives worldwide.

The 32-year-old made a name for himself at Chelsea for whom he played for over a decade before stints at Tianjin Teda in China and in the English Championship with Middlesbrough.

Mikel has won several trophies in a glittering career including the 2013 Africa Cup of Nations, two English Premier League titles and one UEFA Champions League crown with the Blues.