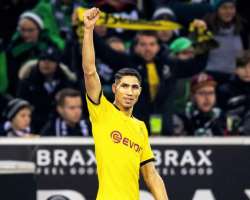 According to the Mirror, the Blues are keen on signing the Morocco international who is currently on-loan at Borussia Dortmund.

Hakimi will report back to Madrid at the end of the 2019/20 season after having spent two seasons on-loan in Dortmund.

The 21-year-old has taken his game to a whole new level in Germany and cemented himself as a first team regular for the Bundesliga club. But with no option to purchase, Hakimi will return to Madrid at the end of the season where head coach Zinedine Zidane is set to make a decision on his future.

While Dortmund will undoubtedly be eager to keep hold of the full-back, Chelsea have now joined Bayern Munich in having expressed their interest in the talented utility player.

Hakimi can play at both left and right-back while he has been used in midfield by Dortmund for the majority of the current campaign to great effect.

In total, he has directly contributed to 17 goals in 37 matches for Dortmund this season. (Mirror)