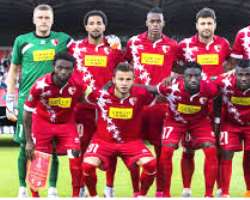 Swiss side FC Sion have sacked nine first-team players after they refused to take a pay cut due to the coronavirus outbreak, with the head of the Swiss players' union (SAFP) calling the club's the decision "outrageous".

Like football around the world, the Swiss league has been brought to a standstill, depriving clubs of much of their income for possibly several months.

Sion dismissed nine players, telling Reuters in an email that they had refused to be put on part-time work in accordance with government directives.

"It's not acceptable to behave like that," SAFP president Lucien Valloni told Reuters.

"If a crisis appears, you have to look after your employees and not put a gun to their head and tell them they have 24 hours to decide on a [wage] a reduction or not, and then if they say no -- which is their right -- they are sacked. That is really outrageous."

Valloni said it was premature to consider salary cuts and that clubs should look for more wide-ranging solutions.

"I think it was a bad sign, a wrong sign, and not a sign for solidarity," he added. "Even before Sion did that, we were looking to find a solution for everybody and players were ready to help the clubs but salary reduction is premature."